I Felt Compelled to Draw this Lightning Bug 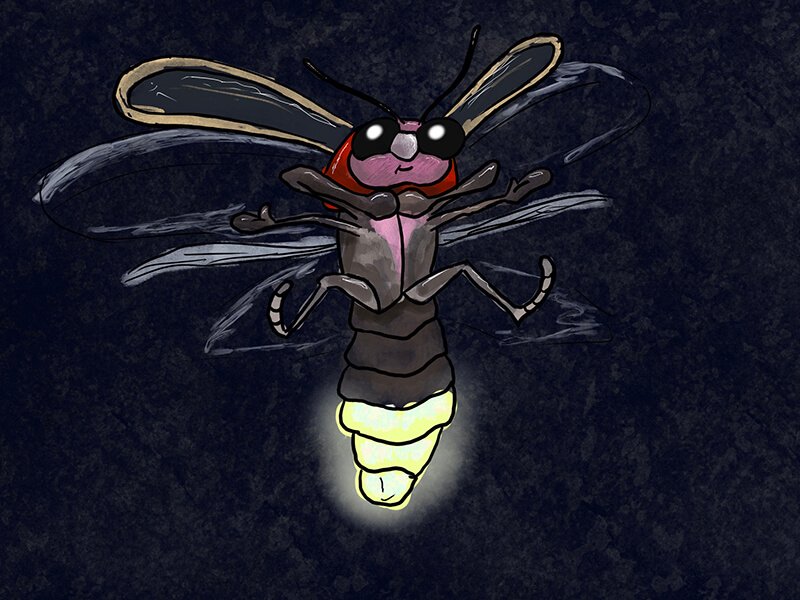 I couldn’t help but smile when I saw the photo of this lightning bug on Facebook:

He looked like such a happy and content chap. Something told me to make a little cartoon from this little guy.

In summer, the yards can be full of fireflies in the Chicagoland area. I remember as a kid catching as many as we could and putting them in jars with holes in them. I don’t seem to see as many of them these days… but I’m also not quite on the hunt for them as I was back then.

Last weekend, two of our kids were quoting the lyrics from the song Fireflies from Owl City which I sang to them as little ones while strumming the guitar.

Two days ago, we wrapped up a major remodel project where we had both bathrooms renovated. As the very talented workers were packing up, I noticed that a little stray lightning bug was slowly scooting across my floor. So, I picked him up carefully and sent him on his way outside again.

It’s been a bit of a lightning-bug filled week, in short.

A Little About Fireflies

According to the University of Illinois Extension, the species of light-emitting beetle we normally see is “big dipper” (Photinus pyralis). These fascinating creatures have been omens of good luck among humans for millennia. In Japan, they are a symbol of change because their presence signifies midsummer, and there are whole parks devoted to their preservation and viewing.

I like to think that, perhaps, I needed these fireflies this week. I needed inspiration to draw. I needed inspiration to write. I needed some luck. Finally, I needed to be reminded that change is good. I will be undergoing a significant career change starting on Monday, and, while I’m excited at the possibilities, changing from what has been the status quo for quite a few months to a whole new reality can be a scary thing full of unknowns.

Fireflies grow as glowworms for up to two years and then abruptly change and take flight. Here’s hoping that I’ll emerge in flight in my career with this move.