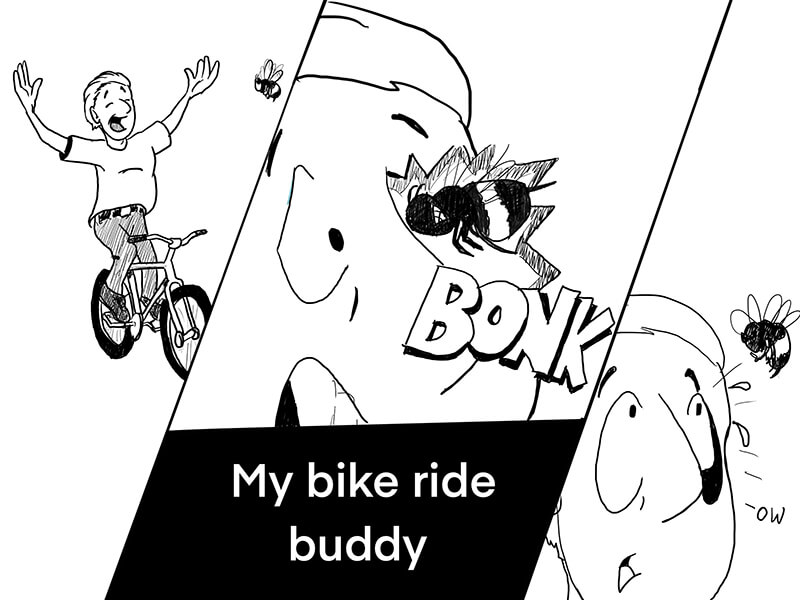 Well, call me uninspired, but yesterday’s writer’s block is hitting me again today. So, I thought I would continue some of the musings that crossed my mind during my bike ride yesterday which ruminated overnight and into this morning’s outdoor 4-mile run.

I had an opportunity to sleep on it a bit, and I thought of a few more connections between riding a bike over the rolling hills of Chicago’s Southwest Suburban forest preserves and my experience in business as a marketing director and consultant.

So, yesterday I was “showboating” a little bit (to myself) and took both of my hands off the handlebars. I took a photo of my shadow using both hands, which is the image I used in my last blog post. When I stopped acting the fool and resumed riding normally, I, of course, wasn’t paying too much attention to the very fuzzy bumblebee or carpenter bee which hit me square in the eye with its head. I mean this guy really whalloped me with a mighty headbutt.

How many times in business management do we allow ourselves to get distracted or we simply aren’t paying attention to what’s around us, and then we hit a snag. An email gets sent which has a typo, I inadvertently used the wrong artwork, or a webpage goes missing because of an empty-headed software update. While I’m not 100% at doing this, I have learned through the school of hard knocks that, when some kind of change is made or a distraction happens during execution, it’s best to check and test before deployment.

I was tempted to simply continue to ride at least another couple of miles and take a new route. However, I decided to turn around before I got lost. I recall one time taking an unfamiliar running trek and, instead of going six miles as I had planned, I ran slightly more than 10 miles, for which I was unprepared.

They say, “failing to plan is planning to fail,” and I do believe that. Going into a new project with some documented or at least discussed plan produces better results than forging ahead blindly.

When I was riding, I took out my phone once more and shot the following video.

I found myself impressed with the difference between the manicured northern section of the forest preserve and the wilder southern section. Each was beautiful and refreshing, but each had its own unique look, feel, and scent. I settled into a few moments of inner calm and appreciation of the scenery and the pleasantness of the ride.

We just watched “The Shining” on TV recently, and the phrase, “All work and no play makes Jack a dull boy,” rings true. A big part of the “Organizational” component of I-O Psychology is motivation and job satisfaction of the employee. We really should find some degree of pleasure in the work we do. It makes the time we spend at work worthwhile and provides us with purpose, identity with the organization, and a sense of accomplishment.